It's time to find out what attracts the attention of experts and fans: and it's time to determine at which matches we can get the most vivid impressions and emotions. Monday, 22 July. Fans of the Champions League and the Europa League are waiting for the draw, which will be held in Switzerland. Arsenal Tula are already ready to enter the Eurocups on Thursday (and the opponent is a star), but Spartak and Krasnodar are just finding out who they will have to play with. Tuesday 23 July. Tuesday is the day of qualifying rounds in Eurocups and the start of the second qualifying round of the Champions League and Europa League. On Tuesday, PSV and Basel will meet, and the duel between Victoria (Czech Republic) and Olympiacos (Greece) also looks interesting.

Wednesday, 24 July. All attention is on the qualification of the Champions League. 7 matches at once, among which BATE, Celtic and Red Star will play.

Thursday, July 25 An insane number of matches in Europa League qualifying. And be sure to follow the debut in the Europa League of the domestic "Arsenal" (Tula). Azerbaijani "Neftchi" will come to visit the team. 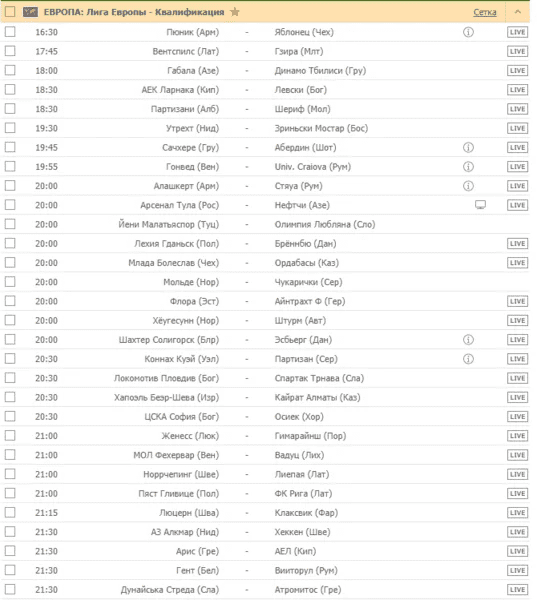 Friday, July 26th We return to the RPL and are distracted by the Eurocups. The performance of domestic clubs pleases after the first two rounds. We are especially looking forward to the game between Dynamo Moscow and Ural: Muscovites must rehabilitate themselves in front of the fans for the defeat from Rubin.

Friday's bonus will be the start of the Second Bundesliga in Germany. Stuttgart and Hannover have recently left the top flight and now clearly intend to return. The fight will be hot.

Saturday, July 27th Saturday will delight with RPL matches, and the central game will be the battle of the debutant Tambov against the experienced Spartak.

Sunday, July 28 At the end of the week, you can not miss the Moscow derby CSKA - Lokomotiv. By the way, "Orenburg" will try their luck in the game with "Zenith", and the Tula "Arsenal" will take "Rostov".

Facebook
In contact with
classmates
Previous Big sports and the best sporting events of the week - with Pin Up Bet!
Next The main sports events from 29.07 to 04.08 are in the Pin Up Bet digest!