It's time to find out what the new week has prepared for us in the world of sports. Are you ready for the most vivid impressions? Monday, 29 July. The beginning of the week will delight football fans with the completion of the third round of the Russian Championship. In Kazan, Rubin will meet Akhmat at 20:00 Moscow time.

Tuesday, 30 July. The second day of the week is the return matches in Eurocups. The intensity of passions grows with each new round of qualification. The PSV-Basel match is considered by many to be perhaps the brightest on this day: in the last meeting, the teams staged a natural war, finishing playing with a score of 3:2. Nevertheless, Basel has every chance to go further, so they will fight to the end.

And if you expect games from the best teams, then pay attention to the Audi Cup tournament. 4 famous clubs: Real Madrid, Tottenham, Bayern and Fenerbahce will meet on the field on Tuesday.

In addition, the first round of the Championship of Ukraine is underway. We are waiting for the games "Desna" - "Lviv" and "Kolos Kovalevka" - "Mariupol"

Wednesday, 31 July. The middle of the week will please with the Champions League and the Europa League match. And in the Championship of Ukraine, Dynamo and Shakhtar will join the fight: the teams are expected at the first away matches.

Thursday, August 1st The fourth day of the week is Megafootball Day. A huge number of Europa League matches: look, do not get confused! Since the return matches are coming, it means that the felling is going to be notable - it's time to cheer for the best. 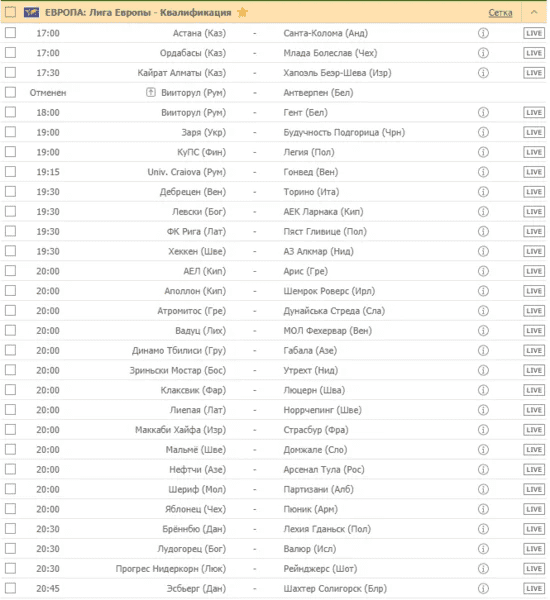 Let's pay attention to the away match of the Tula Arsenal. The team played poorly at home against Neftchi (0:1), so to go further, the club will have to jump above its head. Friday, August 2nd There are two more interesting tournaments. The top league in the Netherlands kicks off with a match between Zwolle and Willem II, while the Championship starts in England.

Saturday, August 3rd Saturday will be the day of the RPL: all fans and fans are waiting for the 4th round. Don't miss the famous derby "Spartak" - "Dynamo" and a real super match between "Zenith" and "Krasnodar", which both participate in the Champions League.

And of course, the Dutch Premier League will go on its own. The Super Cup in France begins its season, and we are waiting for an amazing duel between PSG and Rennes. But the Bundesliga will delight with an equally bright battle between Borussia (Dortmund) and Bayern.

Sunday, 4 August. In the RPL, the daring Tambov will host Arsenal, and CSKA will come to visit Rubin. The last match of the day - "Sochi" against "Ufa".

In Portugal, the match for the Super Cup will open another championship: we are waiting for the game between Benfica and Sporting.

Don't miss the main events of the week Pin Up Bet!